Cairns to the Tip of Australia with Isuzu 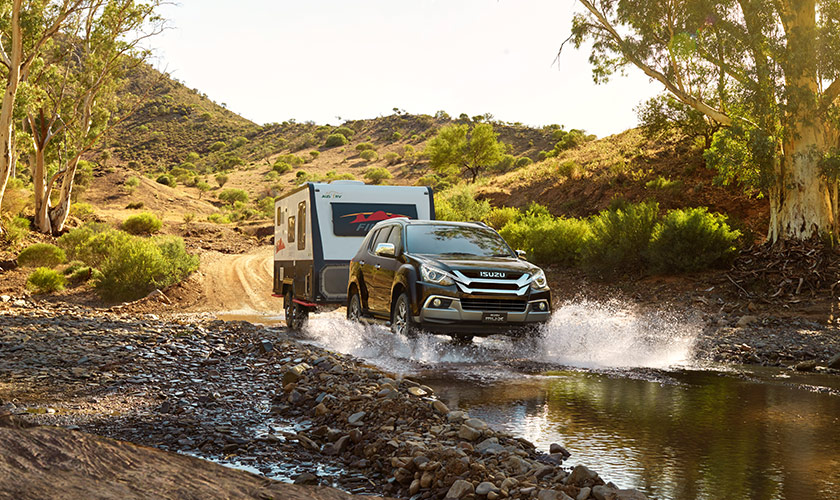 For many four-wheel-drive owners, the journey to the northern most part of Australia is on their bucket list. But it’s not as easy as it seems, even in an Isuzu.

Sitting in the car parked in Cairns, at first you think the map is lying to you. Tap in destinations such as Weipa or Seisia – two popular locations on the western side of Cape York – and the navigation estimate says it will take the better part of 24 hours or more to get there.

If the road was paved all the way, you could do the trip in about eight hours. However, not only is the road not paved, it is mostly dirt of the worst kind: corrugated.

With the right off-road tyres (cushioned sidewalls, small rims) and the right suspension you could cover ground in a decent amount of time. But tow anything – even an off-road caravan – and you’re reduced to a crawl much of the way. Even the long haul road trains who do this trip every week were reduced to walking pace at times.

I now know this having spent a week in Cape York – the peninsula north of Cairns – towing a double jet ski trailer.

I was part of a charity ride with a group of 14 jet skis that started in Weipa and ended back on mainland Australia after travelling via Thursday Island and the island of Daru in Papua New Guinea.

The Torres Strait crossing has been done by jet skis before – by four people with permission in 2013 and an unlucky fugitive who was nabbed during an escape attempt earlier this year.

Our journey was to raise awareness for Sarz Sanctuary, a charity set up to aid the families of murder victims. The charity was established by the parents of Sara Zelenak, the 21-year-old Australian killed in the London terror attacks in June 2017.

The family is well known in the ocean-riding jet ski community, so this epic journey was done in her honour. Sara’s father was part of the road crew for this event, having been one of the four riders who did the crossing on jet ski in 2013.

Getting to the start line in Weipa was an adventure in itself. Driving from Sydney to Cairns was a three-and-a-half day exercise, but seemed like a snack compared to what was to come next.

For the road trip we enlisted the help of an Isuzu MU-X LST, the recently revised top-of-the-range model.

Aside from the nudge bar – and LED light bar perched across it – it was showroom standard. The only additions I made were roof racks and a roof storage pod, and a large heavy-duty rubber mat to protect the floor and back seats while they were stowed.

We also borrowed an extra spare tyre and stored it under the luggage, which filled to the roof. In the end, you couldn’t squeeze a beach towel in there; we had used every nook and cranny.

There was no way the drop-down DVD screen was getting a run on this trip. But we figured plenty of food and water plus two spare tyres would be a wise move given the remoteness and the road conditions.

I also chronically overpacked. I could have been stranded for a month and would still have put on weight.

There is food in most of the small towns along the way, provided you arrive in daylight. Top tip: the burgers at the Great Northern Cafe in Coen (it’s the first one on the left on the way in from the south) are the real deal.

The roadhouse at Lakeland (between Cairns and Coen) does decent tucker as well. Plus there’s time for the food to settle because you’re on sealed road for the first 70km or so.

But after that, all hell breaks loose as the road turns into rubble, and you begin to question your decision to embark on this journey, especially when there is no sign of relief ahead.

Isuzu recently switched to highway-biased off-road tyres – rather than all-terrains – which initially made me a touch nervous, but the Isuzu rep assured us they would be fine for the journey.

Spoiler alert: incredibly, we didn’t get one puncture on the way there or back, although we did get a bubble on one of the four trailer tyres after hitting an edge when the road went from dirt to bitumen.

We switched the trailer tyre over in Weipa, but only after (luckily) finding a tyre shop who could swap it off our spare rim.

The trailer got new wheels, tyres and hubs for the trip. Unfortunately they didn’t match the stud pattern of the spare. Bugger. Thank goodness we found a tyre fitter.

On the Isuzu, I naively drove with full tyre pressures on the way to Weipa (about 36psi hot). However, once I was on the jet ski and in the water heading for Thursday Island, the road crew wisely dropped the pressures to about 32psi hot.

Four-wheel-drive experts will already know this, but for novices the rationale is as follows: less pressure in the tyre enables the rubber to roll over sharp rocks more easily, rather than having them dig into a tyre at full pressure and possibly puncture it.

The drop in air pressure made the steering less responsive but it made the car more cushioned over bumps. Well, cushioned in relative terms.

It quickly became apparent the lengthy navigation time estimate was close to the mark – and corrugations and trailers don’t mix. Like the road trains, we too were slowed to a crawl much of the time.

Some corrugations are shallow enough that, with enough speed, you can skim over them. But when they’re deep, nothing can save you except slowing down.

Because the traffic in either direction is so light – even in peak season, winter – and there’s plenty of visibility ahead on the long straights, it’s not uncommon to chase smoother sections of dirt even if it means crossing to the other side of the road.

Or using what we referred to as “the footpath”, the section of dirt on the other side of the guide posts. In many cases the footpath was smoother and easier on the car and its occupants.

Because it’s hard to see who is behind you in the dust, passing etiquette requires constant checking of the side mirrors (our rear view mirror was blocked by swags) and keeping an ear out for the two-way radio.

Most slower drivers move over, most passing drivers make sure you’ve seen them and give you a wide berth so you’re not showered in the stones thrown off their tyres.

Unfortunately, though, hoons still exist even in the four-wheel-drive community. Fortunately, they are in the minority and most people out here look out for each other.

The other thing that genuinely surprised me was the fuel economy we were getting out of the fully loaded Isuzu MU-X while towing a trailer weighing, conservatively, 2500kg.

That may be 500kg less than its 3000kg towing capacity but we were still asking a lot of the whole set-up.

The average fuel consumption sat around 12.2L/100km for the entire journey, which was remarkable given the weight and the trying driving conditions.

Pushing through dirt on slightly under-inflated tyres is not as easy as driving on sealed roads with the correct tyre pressures.

I will also never again curse bumpy Sydney roads. The patches of sealed sections we were treated to on the trip were like finding water in a desert.

To my budding co-driver and me, the heat coming off the black tar ahead in the distance looked like an oasis. We wondered if it was real. Sadly, the relief was always short-lived and we were back on punishing corrugated dirt roads in no time.

The other element that staggered me was how easy the Isuzu 3.0-litre turbo diesel four-cylinder engine was working, despite the conditions and its relatively low power output.

It ran mostly low in the rev range but still had plenty of grunt. I have previously criticised the Isuzu for not having much power or torque compared to its rivals, but it’s now apparent to me that the numbers are academic.

It gets the job done without raising a sweat, a not-so-quiet achiever. I’m starting to understand why some Isuzu owners are fanatical about their cars. It is, after all, a truck engine that’s been fitted to an SUV and a ute. No wonder it’s light work.

The key to keeping our sanity and making good time was getting an early start each day, on the road before sunrise.

It’s not ideal to drive in the dark – or at dawn or dusk – because that’s when animals become a danger on the road. But we backed off our pace until the sun was up. It was just important to get rolling and buy some time to help knock the journey over.

On the return trip from a campsite called Captain Billys Landing (on the coast between the Jardine River and Coen) we left at 3am and arrived in Cairns at 6pm after stopping only for food and fuel. The first 30km took 45 minutes.

We both wanted to sleep in. There was even talk of pushing back our start time to sunrise.

But once we rolled into Cairns and back to civilisation – and a hot shower – at dusk and in time for a decent feed, it was absolutely worth the effort.